As the school year comes to an end, there are more and more activities and events on campus. Most recently, I was involved in the week-long Francophonie festival, which was organized by the French club. After having been recognized by the French embassy for its diversity and contribution to the French Language, the French club celebrated and showcased the various cultures of French speaking countries. The club members and I pulled our strengths together to make dishes, create performances and presentations, and promote Francophone culture.

The week-long festival started with short country presentations given to the public by students representing a particular francophone country, including Côte d’Ivoire (given by me!), Tunisia, Bretagne (a region of France), Burkina Faso, and of course, France! I even learned some fun country facts; Planet Tatooine from Star Wars is an actual town in Tunisia! There were also movie screenings such as Kirikou and the Sorceress, one of my favorite animated films, and Timbuktu, an Oscar nominee for best foreign film, which shows the effects of Jihadism on both the victims and culprits. I was very happy to see that some of the events were considered extra credit for various courses!

To conclude the event, we organized a dinner, with dishes from various francophone countries. As a result, I decided to make our famous alloco (fried plantains), fried sweet potatoes, and my own recipe called sardine fried rice. This dish in particular was a combination of a fried rice recipe, taken from my host mother during my stay in China, and Ivorian spices! The biggest challenge was obtaining ripe plantains two days before the dinner. Although it seemed impossible, we were able to find the ideal plantains in the local Walmart! Other dishes included Tunisian couscous and gratin dauphinois from France. In the audience, there were middle and high school students present, and they enjoyed the food as well as learning about the Francophone world.

Finally, the dinner came to an end with an energetic dance performance by me, Haruka, the French club’s president, and Joël from Burkina Farso, to a song called “Remanbele,” by Serge Beynaud. The dance moves were mostly based on an Ivorian dance and musical style called coupé-décalé! My friend, Yasmine, also performed an Arabic dance from Tunisia. Given the success of the festival, the French club and I look forward to making the event happen again next year, and every year after that!

Each year, Juniata holds a Liberal Arts Symposium—a day when all classes are cancelled and students have the opportunity to present their research to the campus community. Oftentimes, international students are not able to contribute to the symposium because many of them study at Juniata for only one semester. For this reason, Grace Fala, special assistant to the President for diversity and inclusion and professor of communication, developed the “Multicultural Storyfest.” This event takes place during the Liberal Arts Symposium and invites international students as well as other interested students to share parts of their heritage with the community.

This year, I am receiving two credits to serve as the intern for the Multicultural Storyfest. I have been working very closely with Grace and a few other students to help coordinate the largest one yet. We will have a total of 19 performances representing the following cultures and co-cultures: African, American Indian, Amish, Burmese, Buddhism, Chinese, Indian, Irish, Italian, Filipino, German, Japanese, Korean, LGBTQ, Maori, Middle Eastern, Pakistani, Salvadoran, Thai, and Vietnamese.

Personally, I will serve as the emcee for the event and also be a part of the performance representing Maori culture in New Zealand. One of my best friends studied abroad in New Zealand, so we are going to incorporate what she learned into our performance. We will be teaching about common greeting words and customs used by the Maori people. Other students will be dancing, singing, playing instruments, modeling, and reading poems.

All in all, I have gained so much valuable experience and many budding friendships from organizing this event. I have been able to meet and talk to people from all over the world!

If you’re interested in attending the Multicultural Storyfest, it’ll take place on Detwiler Plaza on Thursday, April 21st from 1:30-3:00 pm. I hope to see you there!

My study abroad experience was absolutely life-changing, so it only makes sense that it’s having lasting effects now on my senior year. Last year, I studied abroad in Russia in the fall and India in the spring, and though unique to each other, both gave me independence, self-confidence, and a greater understanding of other cultures. 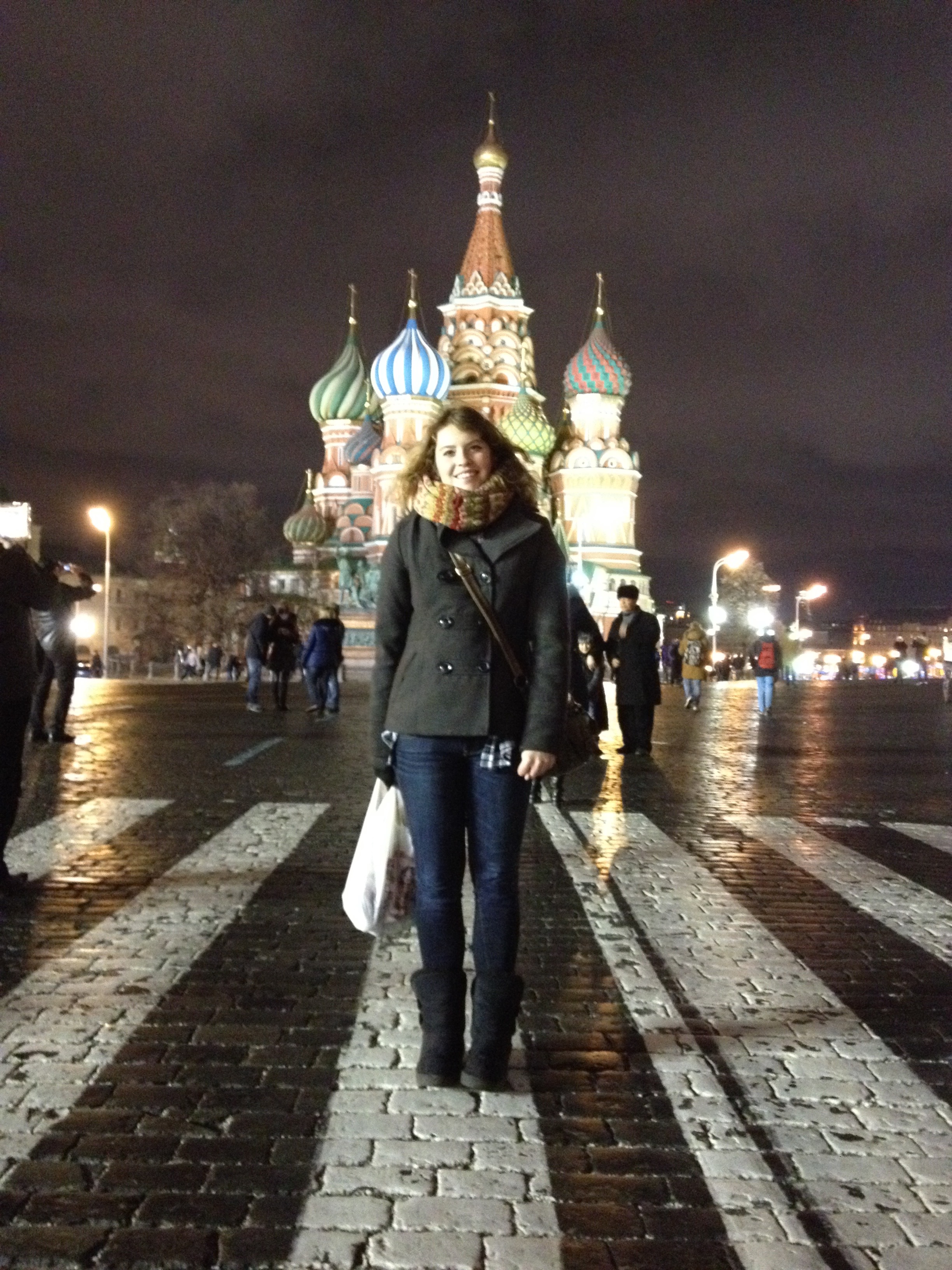 This semester I am sharing that understanding of other cultures with local schools through our Language in Motion program. This program links any student who has first hand language or cultural knowledge (so anyone who studied abroad but also international students too) with K-12 teachers. I haven’t visited any classes yet, as I’m still trying to find a time that fits both my schedule and the teachers’, but I’m excited to share my experiences with the students! Throughout the semester I have been planning lessons, ranging from teaching basic words in Russian to smelling and tasting different Indian spices. Language in Motion not only enriches students’ knowledge and encourages them to study a language/go abroad but also allows me to share my experiences and practice my public speaking and teaching skills.

In addition, I am writing an honors thesis this semester, which was heavily inspired by my time abroad. One similarity that both Russia and India has is its endemic nature of political corruption. This fascinates me (especially the overarching acceptance of corruption), and resulted in questions such as, “How are corrupt acts seen by those living in the society?” “How does external information and dialogue influence the behavior of those receiving the information?” “How is corruption talked about in media outlets?” The more I thought about it, the more I realized that this topic could easily get out of hand and become a PhD dissertation. That last question, however, was manageable and grew into my thesis project.

For several months now, I have been looking at a single political corruption case and through qualitative methodology, I have been analyzing the language that is used in news outlets. It has been a daunting task, and I still have a ways to go.  It’s been keeping me busy, maybe a little busier than a second semester senior would like! This process has and will continue to be very rewarding, though, as I’m learning so much about qualitative research and at the end of April I will present at the Liberal Arts Symposium (eek!). Ultimately, studying abroad has opened up many different avenues and opportunities for me, and I will always be incredibly grateful for that.

The Beginning of the End

As I walked upstairs to my room in Pink, I noticed that my resident assistant had changed the bulletin board. It read, “Celebrate the beginning of the end.” This certainly made me stop and think. My life had been so busy lately that I almost forgot this would be my last semester at Juniata College. I always thought that I’d be ready to graduate, plunge ahead into the “real world,” and then never look back. Well, I’m pretty certain this will not be the case. Although I’m excited for what the future will hold, I’m also more nostalgic about leaving this place than I ever thought possible.

The semester certainly started off differently than all of my previous semesters. During the first two weeks of January, I traveled to the Dominican Republic again on my third Cultural Learning Tour with Juniata College. Although this has been quite the pattern for starting out my spring semester, this particular trip was different in that my father came along, too! A few months before the trip, he asked me if he could go so that he could experience the beautiful country and meet the community members who had become my second family.  During the course of two weeks, we had a wonderful time and made sure not to complain too much about the extreme heat because we knew it was better than the alternative cold weather back home.

We braced ourselves for the cold, but we did not prepare ourselves for the insane amount of snow that would soon surround us. After our first week of classes, Winter Storm Jonas arrived. As the snow came down by the foot, I was at Dr. Will Dickey’s house babysitting his two little girls. By the time he and his wife, Katie, had returned home, the snow was almost a foot high, so they allowed me to stay overnight and wait to drive back in the morning. By the time I woke up, however, we had two feet of snow on the ground, so I wasn’t going anywhere for a while. Surprisingly, though, this was one of the best days I’ve had in a long time. We all made breakfast together and then ventured outside to play in the snow.

All in all, the “beginning of the end” is going quite well for me, except for the fact I can’t tell if my face is still tan or if it’s wind burnt from the cold. Either way, I’m looking forward to what the rest of my last semester has in store! 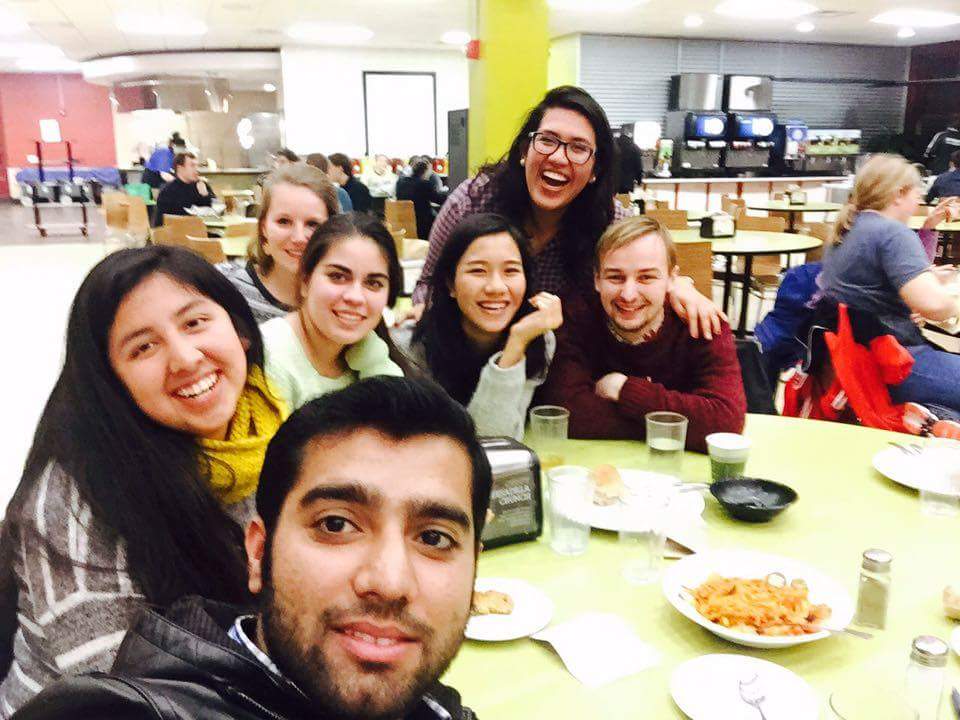