One of the things that I knew I wanted to do coming to Juniata was to get involved with the theatre department. Looking back on my freshman year, I am so happy to say that I was able to accomplish that goal, and was lucky enough to perform in several shows, the most recent one being The Water Bearer.

This show was student written by Juniata seniors Cosimo Sciortino, Lana Boyd, and Peter Rankin. It brings the zodiac signs to life and follows the story of a young Aquarius on their journey to discover themselves. [HMP1]  In The Water Bearer, I got to play Gemini, and I must say it is one of my favorite roles I have ever done. It was so much fun to explore the depth of the character and interact with all the different zodiac signs throughout the show. Our seniors did an absolutely incredible job writing this show and directing us through it. It was a really unique experience to be part of a brand-new play that had never before been performed. It allowed us so much freedom and creativity, and it was an experience I will never forget.

END_OF_DOCUMENT_TOKEN_TO_BE_REPLACED

I can’t believe it’s already February. Time here at Juniata goes by so fast, and I have trouble wrapping my mind around the fact that in a few short months, I will already be done with my freshman year of college. It has been an amazing experience so far, and as I begin tackling my second semester at Juniata, I can’t help but look back on the last six months and think about how wonderful they have been.

END_OF_DOCUMENT_TOKEN_TO_BE_REPLACED

This semester I had the honor of performing in Juniata’s fall production of William Shakespeare’s, Julius Caesar. One of the things that I really enjoyed doing before coming to college was performing in my school’s shows, and when I heard that Juniata was going to be putting on Julius Caesar, I knew that it was something that I definitely wanted to be a part of.

END_OF_DOCUMENT_TOKEN_TO_BE_REPLACED

Mountain Day of the Mind

One of my favorite events Juniata has every year is the Liberal Arts Symposium, or LAS for short. Each year, classes are cancelled for the whole day, and students and faculty are encouraged to travel across campus and attend student presentations about work/research they have done during the year. There are a lot of different types of presentations, and most common presentations are often in the sciences. This year however, I was able to present my own work at LAS, with focus on the Theatre Department.
This semester, I decided I wanted to do an independent study with one of my professors, Leigh Hendrix, and I wanted to attempt to write a full-length play. I have written several short plays (10 minutes or less) throughout my time at Juniata, but I have never tried to write something as complicated and in-depth as a full-length play. I came up with the idea to write a murder mystery, because that is my favorite genre to read/watch. I’ve always loved crime shows and mystery novels, but I never realized just how difficult it is to write a mystery yourself! There is so much background work that needs to occur before one even starts writing in order to create a successful, fluid piece. Once a week, Professor Hendrix and I would meet to look at my writing progress, and map out the entire storyline of the play. I honestly didn’t think I would finish this semester. I know that it sometimes takes years for people to complete a play, and shoving this project onto my already packed work load was definitely difficult for me. However, a few weeks ago I managed to finish a first draft! As soon as I finished the draft, it felt like I had given birth! I had worked hard toward this goal that I didn’t think I would reach, and I did! Over the following few weeks, I printed out the entire script and edited it over and over again. I then recruited a bunch of my friends to aid in my presentation for the Liberal Arts Symposium.

Since I was just doing a public reading of half of the play, it was a less strenuous rehearsal process, since the cast only had to meet once the read through the piece before presenting it at LAS. My play has eight different characters, so I had to ask a lot of different people to be involved, but everyone did such a great job reading their character at the presentation! After the reading, my mentor facilitated a talk-back session, where I could ask questions of the audience and receive feedback about the process. My first question to the audience was: Who do you think did it? To my surprise, although the audience guessed five different characters, none of them had correctly guessed the killer! That was definitely a confidence-booster for me, and it showed me that I wrote a really great play. I received such amazing feedback from the students and staff and outside audience members who came to listen to the reading. It truly was an amazing moment of pride, excitement and joy to hear my words being read out loud, and receiving positive feedback from so many peers.
Although the semester is coming to a close, that does not mean my work on this play is done. For most, a play is never done. There are always changes that can be made. I hope to keep editing this play and make it longer and stronger, and hopefully be able to stage the show at some point next year! Overall, the Liberal Arts Symposium was such a great experience for me to present a project I had put so much effort into, and see how others reacted to it. I can’t wait to keep working on my play!

I’m going to be completely honest: I have had people laugh in my face when I told them what I study at school. When I tell people I’m studying Theatre Performance, I often hear “Okay…but whats’s your backup?” Sorry to disappoint, but I don’t have a backup. I’m an actor and that’s what I want to do. I love performing more than anything in the world and it makes me so happy while doing it, so why not make a career out of it?
I’ve loved performing since the age of three. My first play was The Three Little Pigs, I played Pig #3 and my father played my house. Ever since then, I have loved being on stage. I love creating characters, expressing emotion through text, and getting to be someone I’m not. This semester has given me more than enough opportunities alone to help pursue my career.

At the beginning of the semester, I was cast as Audrey in Little Shop of Horrors. It was one of my dream roles and I was so beyond honored to get to perform that show in front of the entire school. We sold out all six of our performances! How crazy is that! Right after we closed the show, I performed in Unlock Your Voice: Breaking Boundaries, an English-department event celebrating female writers. I chose an intense slam poem about feminism and sexism and it was awesome. After that, I was cast as Callie in Stop, Kiss which opens later this week. This play is incredibly different from Little Shop, and so much more emotionally draining that I expected it to be. I can definitely say this is one of the hardest shows I’ve worked on, and it is such a beautiful piece that I can’t wait to share with the campus community. And recently, I was cast as the lead in a student-written feature film that I will get to work on for a few months next semester. This is not my first student film, but it is my first feature length film and I am so excited to start working on it!
As a young actor, I still haven’t decided if I want to focus more on live theatre or film, because I’m still dabbling in both. At Juniata, however, I have been given the opportunity to try both, extensively, and learn so many skills to help me in my profession. I can never give Juniata enough praise for how incredible the theatre program is here. I never would have imagined to be cast in three separate projects all over the span of a few months. 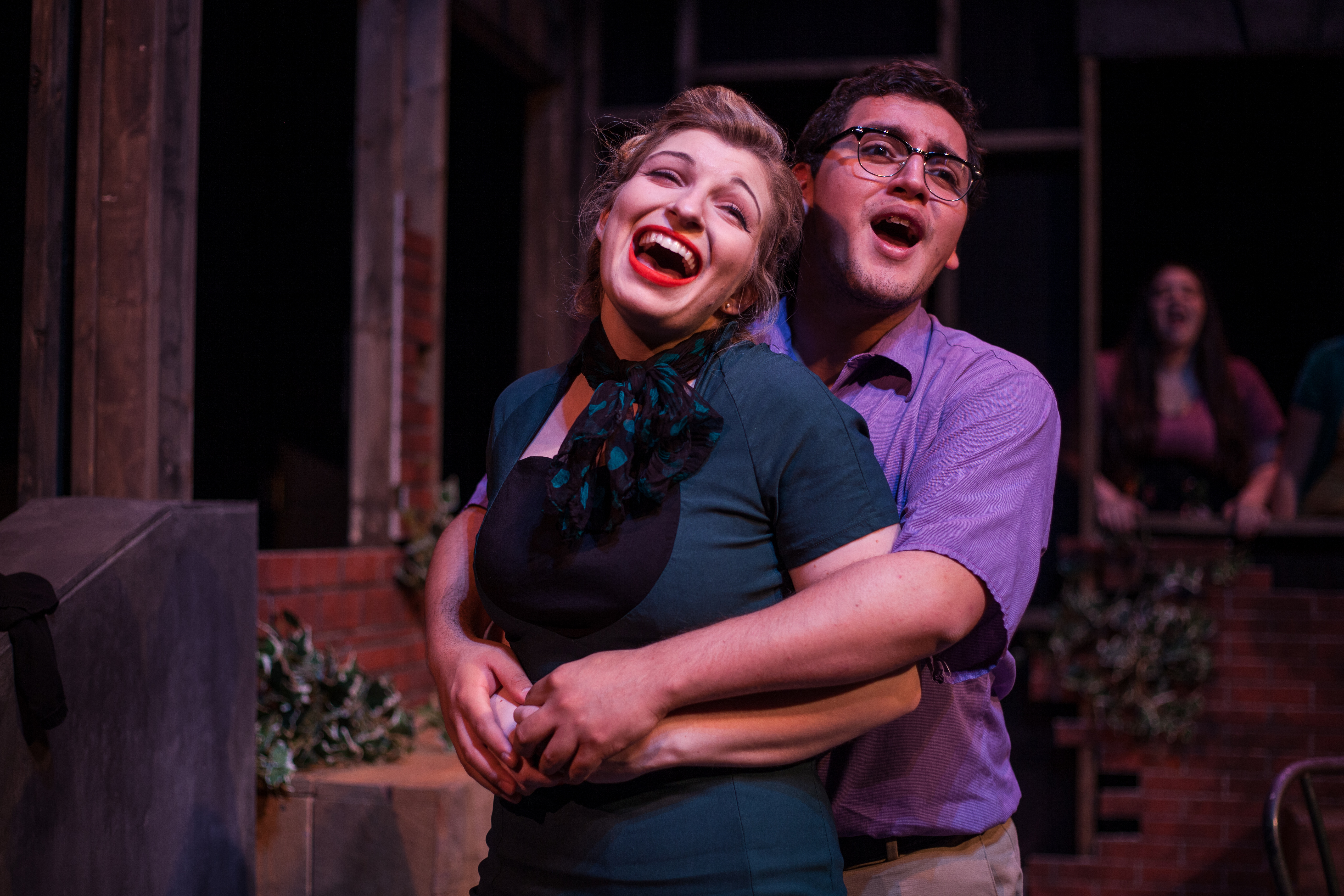 I know I’ve picked a risky career. Trust me, I know. But I chose it for a reason. Performing makes me happy. It gives me energy, it brings my joy, and it brings joy to other people as well in the audience. That is so meaningful for me, and I love what I do. I know I still have three more semesters left at Juniata, but I am so ready to go out into the real world and do what I love.
Photos by: Morgan Horell ’17